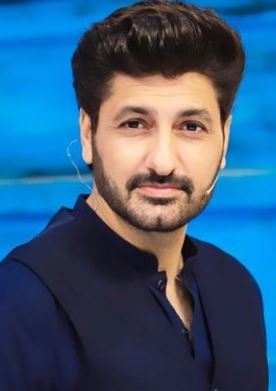 Syed Jibran is a Pakistani actor and entrepreneur. He was born on October 14, 1979, in Jhelum, Pakistan. He is also a charming model of Pakistan fashion industry.

Punjab and he spent his early life in the same Jhelum city. Later he shifted to Karachi city for his showbiz career. He started his career with Pakistan Television Network.

In 2000, Jibran began to pursue his acting career. During the 3rd year of his studies, he decided to pursue for a chance in an acting stint on television. He went around asking for a role in a television drama, but was either politely refused or put on hold.

After that, his mentor Tariq Meraj made sure that he worked on his shortcomings and improved his craft by working with him on many projects. It took him 2 years to make it to Lahore where he landed the role of Bond in the famous sitcom Jutt and Bond sitcom for Indus TV.

After working for a year on the sitcom, he moved to Karachi, where he performed in soap operas Tum Mere Ho and Tere Jaanay ke baad.

Jibran started his acting career with TV serial ‘Aik Kahanee’ which was aired on PTV.

He appeared in a number of TV dramas in lead roles. Some of which most critically and commercially successful dramas were “Khuda Mera Bhi Hai”, “Tum Ho Ke Chup”, “Chup Raho”, “Bojh”, “Ghairat”, “Khudgarz” and many more.

He complete year 8 to year 12 at Cadet College Hasanabdal (CCH)- an elite and academically very selective boarding high school located 60 km from the twin cities of Rawalpindi and Islamabad.

Jibran’s family resides in Karachi. His background originates from Jhelum, Pakistan. His father is a businessman by profession and her mother is a housewife.

He is hitched with the delightful woman Afifa Jibran. They got hitched in the month of July of 2011. Afifa born in London and she additionally spends her life in London before marriage. Afifa and Jibran are proud parents of three children.

One little girl Eva Jibran and two sons Yoel Jibran and Isaiah Jibran. In April of 2017, The wedding of Syed Jibran and Afifa again celebrated at “Good Morning Pakistan” of ARY Digital.