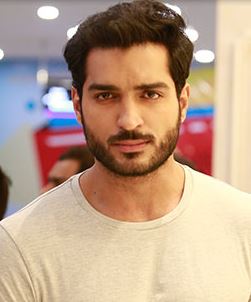 Omer Shahzad is a Pakistani model, actor. He was born on 14th December 1987 in Karachi. Omer started his career in 2011, and has since established himself as one of the country’s top models and actors. He has been nominated for several awards with three consecutive Best Model Male nominations at Hum Awards.

In 2011 Omer started his career as model. He gave an audition for Bridal Counter Week. And got selected by Vaneeza Ahmed. According to Omer in his interview in a leading daily, he was one of the eight male models who were selected among 200 boys and girls in audition.

He marked his screen debut in 2013 with Geo TV’s drama series Adhoori Aurat in a negative role and went to work in Choti Choti Khushiyan, Chor Darwazay and hit-drama series Noor Jahan. But he rose to for his role in drama series “Noor Jahan”. Which became him household name and earned for him huge fan following.

He has number of hit dramas in his credits. Some of which are “Natak”, “Alif Allah aur Insan”, “Be Reham”, “Bahu Begam”, “Mere hamrahi” and number of others.

He marked his film debut in 2015 with romantic comedy film “Teri Meri Love Story”. He played the character of Ramis opposite Mohib Mirza, Mohsin Abbas Haider and Ushana Shah.

Omer was also part of “Jawani Phir Nahi Ani 2”. He played negative role in the film which had Humayun Saeed, Fahad Mustafa, Mawra Hocane and Kubra Khan in leads.

Omer Shahzad is single yet and looking for a partner.

Omer completed his early as well as higher education from the Karachi city.