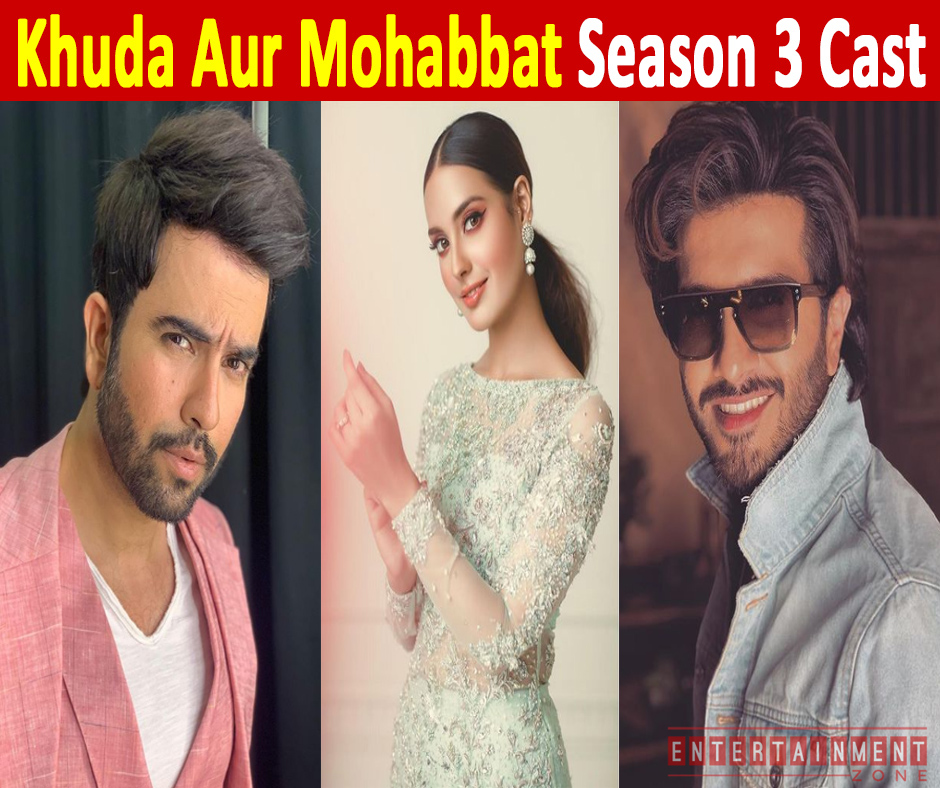 Khuda Aur Mohabbat season 1 and season 2 amazing dramas with outstanding cast and story. Season 3 air soon on Geo Entertainment with a talented cast and interesting story. The drama will be full of romance, emotions, and excitement.

Khuda Aur Mohabbat Season 3 is director Wajahat Hussain and writer Hashim Nadeem under the production of Abdullah Kadwani and Asad Qureshi’s 7th Sky Entertainment. Feroze will be playing a confident young boy from a lower-middle-class background, who falls in love. This love story is to fall into the realm of romance and spirituality.

Feroze Khan is known for his emotional and romantic acting in dramas. His debut drama was Chup Rahi with Sajal Ali. She got more popularity from his super hit drama “Khaani” with Sana Javed. He has a huge fan following due to his outstanding acting skills. In Khuds Aur Mohabbat Season 3, he will appear with his best acting and strong character.

Iqra Aziz as (Mahi) will pair up with Feroze Khan in Khuda Aur Mohabbat Season 3 and will appear as the best on-screen couple. Iqra Aziz Hussain is a Pakistani television actress. She is the best know to play the role of Jiya in Momina Duraid’s Suno Chanda, for which she received critical acclaim and Lux Style Awards for Best Television Actress. Aziz first auditioned as a television commercial model and was pick by Citrus Talent Agency.

Junaid Khan is a Pakistani film actor, singer-songwriter and television actor. He is the lead vocalist of the band Call, which has released two commercially successful albums, Jilawatan and Dhoom.

Mirza Zain Baig is one of the most talented and diverse artists to have emerged in recent years.

Sunita Marshall is a Pakistani fashion model and television actress. She is best known for her roles in ARY Digital political drama series Mera Saaein.

Tooba is a Pakistani model. Siddiqui started her career by starring in a Music Video “My Love” for pop singer Yasir Akhtar. She began modeling for the Pakistani fashion industry in the early 2000’s. She has appeared in campaigns for Deevees and Diva.

Asma Abbas is a Pakistani actress, producer, singer and host known for her supporting roles in Urdu films and television.

Usman Peerzada is a Pakistani TV and film actor, director and producer. He has acted in many Punjabi and Urdu films.

Noor-ul-Hasan has been an actor who has proven his versatility as an onscreen performer over the years. His earliest performance came in the popular sitcom ‘Wrong Numbers’, which was directed by Jawad Bashir and was aired on Pakistan Television (PTV).

Javed Born in Rawalpindi gawalmandi, Jawed Sheikh made his acting debut in the Lollywood film Dhamaka, written by Pakistani writer Ibn-e-Safi released on 14 December 1974. He acted in over 100 films in Urdu and Punjabi. He has also appeared in many television serials which have aired on PTV, Hum TV, Geo, and A-Plus. The first film he directed was Mushkil, released in 1995. In 2002, he directed Yeh Dil Aap Ka Huwa, in which he also played a supporting role.

Hashim Nadeem has already given two strong drama series to Geo TV and in a matter of days, the dramas have captivated the hearts of viewers not only in Pakistan but all over the world. Drama stories set records of popularity and remained at a high level of ratings. Hashim Nadeem has so far produced 27 telefilms and 11 dramas. His most popular novels are “Bachpan Ka December, Abdullah, Khuda Aur Mohabbat.

Feroze posted a picture on his official Instagram account from the sets of the series revealing his character look in the season.